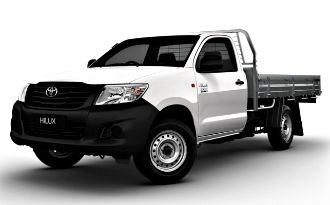 About the 2012 Toyota HiLux WORKMATE

The 2012 Toyota HiLux WORKMATE is a rear-wheel drive cab chassis that was released to the Australian market on 01/09/2011 classified as a TGN16R MY12. The HiLux is regarded as a pick up or cab chassis 4x2 built in Thailand with prices from a dealer as a used car starting at A$11,600.

The 2012 Toyota HiLux WORKMATE has a 177mm ground clearance with a 2250kg braked and 750kg unbraked towing capacity. It has a final gear ratio of 4.1.

The HiLux has received a 4 star rating from ANCAP. The VIN number can be found on the Rear Driver Side Chassis and the compliance plate is located on the Lower Pass Side Centre Pillar. An example VIN number would be similar to MR0CX12G100123456.