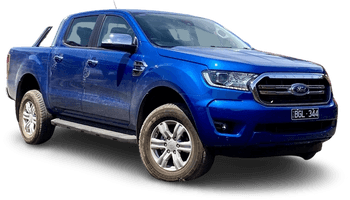 About the Ford Ranger

Often competing with the Toyota Hilux for the best selling car in the country, the current generation Australian-engineered Ford Ranger has been a hit since its release and Ford has continued to update the car.

The XLT with the bi-turbo 2.0-litre engine is the most popular variant of the Ranger, which is why we have it here in the experience centre.

Claimed combined-cycle fuel economy is a very low 7.4 litres per 100km, which with an 80L tank extends the theoretical range beyond 1000km between refills.

The tub is 1549mm long (21mm shorter than the Mazda/Isuzu twins’), 1560mm wide (30mm wider than the aforementioned twins), 1139mm between the arches, and 511mm deep. You can also order the Ranger XLT with a steel dropside cab-chassis-style tray. The payload is 1003kg.

The Ranger is getting on in age, but its interior remains functional and fit for purpose – though it irritatingly lacks telescopic (reach) wheel adjustment. The fabric seats are manually adjustable but quite supportive on long trips. You can option leather trim if you prefer.

That padded wheel is nice in the hand, the audio and cruise buttons are ergonomic, and the twin-screen instruments look pretty nifty, though you have to choose between a digital speedo or tachometer in the right screen, because the left one shows directions and multimedia.

The fact you have to switch between these two functions is gripe-worthy.

The plastics used on the dash and fascia are rock hard but the panels are put together well, and the fact there’s no gloss black trim like you find in all the aforementioned rivals means it’ll hold up better against dust, smudges, hair and other worksite mess. In other words, it hides dirt better.

While the Ranger remains a solid choice for buyers in the ute market, we recommend test driving the Nissan Navara and Isuzu D-Max for direct rivals and the Mitsubishi Triton for value.